Places to See in Nainital 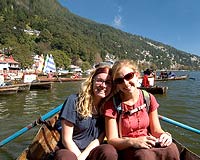 The hill station of Nainital, situated in the foothills of Kumaon, is known to enjoy nature's splurge to the fullest. People flock to this beautiful town of Uttarakhand, just to enjoy its gripping weather and splendid natural beauty. Apart from natural splendor, the places to see in Nainital include a host of other attractions as well. The hill resort is covered with lofty mountains and is dotted with lakes, where one can indulge in trekking and water sports, respectively. Boating in the numerous lakes of Nainital is quite a common activity, in which the tourists indulge. To know about the other places of interest in Nainital, use the information provided below.

Naini Lake
Naini Lake is situated in the heart of the city and it is owing to this lake that Nainital earned its name. The eye-shaped lake is a tourist hotspot and acts as a magnet for all those visiting the hill resort. Here, a person can either take a leisurely stroll or indulge in boating and enjoy the surrounding beauty. The northern end of the lake is called Mallital, while the southern one is called Tallital. The Lake Bridge that connects the two banks has quite a few shops as well as a post office, the only one in the world to be located on a bridge.

Nakuchia Lake
Nakuchia Tal is a lake in Nainital, known for having nine corners. This lake is still untouched by majority of the tourist population and owing to this, has managed to maintain its serenity till date. Take a walk around the nine cornered lake to enjoy the beautiful natural setting. Otherwise, you can also go on a boating tour and explore the scenic surroundings.

Bhimtal Lake
Situated 22 km from the city center, Bhimtal Lake is the biggest lake of Nainital. It is named after one of the Pandav brothers Bhim. The lake boasts of an island within its precincts, which is home to a very famous temple. During the day, one can easily hear the chiming of temple bells, even from the embankment.

Naini Devi Temple
Nainital is believed to be one of the 64 Shaktipeeths, where one of the body parts of Goddess Sati fell, when Lord Shiva carried her body. In Nainital, the eyes (naina) of the Goddess are assumed to have fallen. The shrine of Naina Devi is a must visit for devout Hindus. The temple is located on the northern shore of Naini lake and was reconstructed after being destroyed in the infamous 1880 landslide. One can also get an amazing of the hill station, overlooking the lake, from the temple.

Governor's House
Built in 1899, Governor's House or Raj Bhavan is a marvelous reminiscent of the British era. Built in Victorian Gothic style, it served as the residence of the Governor of north-western province and later the United Province. Raj Bhavan is an architectural marvel and adding to its beauty are the well manicured lawns, a swimming pool and a golf course, situated within the premises. Presently, the structure serves as the guest house for the Governor of Uttarakhand. However, one has to take prior permission to visit the place.

St. John's Church
Built in 1844, 'St. John in the Wilderness' is one of the most tranquil places in the town of Nainital. The church is located on Mallital, the north end of the town. The Bishop of Calcutta, Daniel Wilson was the one who laid the foundation of the church in Nainital.

Snow View Point
Situated at an altitude of 2,260 m, Snow View Point is one of the coldest regions in Nainital. Here, you can capture breathtaking pictures of snow-covered peaks and mountains. The ideal time to visit snow point is during the months of October and November. A sojourn to Nainital is undoubtedly incomplete without a visit to the Snow Point.

Naina Peak
Overlooking the Naini Lake, Naina peak (2611mt) provides the most breathtaking view of the hill station of Nainital. Situated at a distance of about 6 km from the main town, Naina peak is the highest peak of the hill station. Horses or ponies can be hired from Snow View Point or Mallital, if one intends to visit the peak. Naina peak is also referred to as the China peak and is an absolute delight for trekking lovers